Marigolds are very low-maintenance once they’re established, and generally quite pest-free. Marigolds can flower almost continuously and will bloom all summer. It is important to keep your plants neat and tidy in order to preserve their beauty.

In summer heat, flowering may slow down and then accelerate when it gets colder.

To produce the most beautiful and healthy marigolds, you must place them in full sun. Poor conditions will result in fewer flowers.

Marigolds aren’t fussy about their soil. Good garden soil and water can help keep them on track. Make sure the soil isn’t too acidic.

The soil pH should be between 6.0 and 7.0. You also don’t need soil rich in organic matter. This plant actually thrives in lighter soil.

How to Water Marigold

When you plant marigold seeds or plants, make sure they get enough water. They shouldn’t be in dry soil for more than a couple of days. Your new plants should be watered every day if it is hot and sunny.

Once they’ve established a good root system, they will be more drought-tolerant, but for the best blooms, give marigolds a weekly watering. Don’t water from overhead but rather at the base of the plant.

Because marigolds love heat, they thrive in summer heat. They can tolerate a wide range of humidity levels but may develop powdery mildew if it is humid or damp.

If you Plant in full sunlight and leave room for growth for airflow you shouldn’t have a problem. This plant  prefer relatively dry air.

Marigolds do require fertilizer unless the soil is very dry. Don’t fertilise them during growth as too much nitrogen will stimulate lush leaves rather than flowers.

Mulch can be added between plants to control weeds. This is especially important when young plants are involved. We’ve learned a thing or two about types of mulch for the garden and when and how to use it. The ultimate mulch guide is now available.

How to prune marigold

Regular deadheading marigolds is the best way for them to stay in bloom. Simply remove the flower heads, and then pinch the petals off to deadhead them.

Are you unsure of the best time to deadhead? When a flower starts to go bad, cut its stem back to the nearest set of leaves. If it can remove its early flower buds, a marigold plant will grow taller and produce more flowers.

Regular deadheading will ensure that your marigolds continue to produce flowers throughout the autumn. When they become damaged by cold temperatures, marigolds can be pulled out of the ground and thrown away.

You can leave some Plants in the gardenTo self-seed. The birds do not eat the marigold seeds. Instead, the heads are ripped off by the birds. This is a great way to encourage self-seeding. 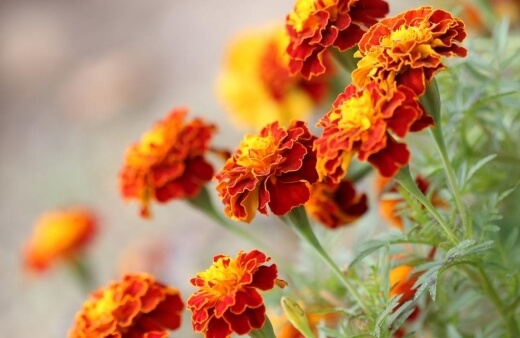 In the 16th century, Marigolds, which are native Mexico and Guatemala, were first discovered. After being brought to Europe and Northern Africa in the late 16th century, they quickly grew in their local gardens. The genus name Tagetes is derived from a mythical Etruscan goddess.

The scientific names of this plant allow us to divide it into two categories. The first category includes varieties from the Calendula familyLatin name meaning ‘, which is a name that means ‘. “little clock”.

The second group of marigolds is from the The family of Tagetes. This name is a result of a religious prophet named Tages who influenced Etruscan culture. The common name Marigold comes from the plant’Instead of using gold coins, s use is as an offering to the Virgin Mary.

In Victorian times, marigolds represented despair and grief. Modern meanings of marigold flowers are based upon their beauty and sunny colour. They convey optimism and success.

Marigold plants were used to lure a lover in the Middle Ages.

Marigolds produce flowers that look a bit like daisies or carnations. There are about 50 different species, but most marigolds we see in the garden are one of the following: 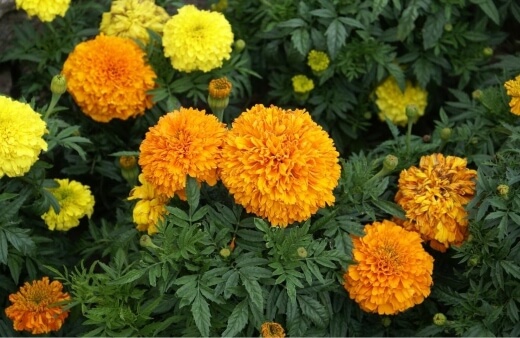 This marigold is tallest and uprightest. It produces large, full-flowered, beautiful flowers. They’re native to Mexico and Central America and will happily thrive in drought-like conditions. 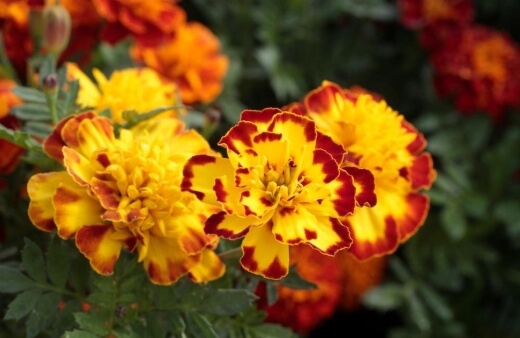 T. erecta marigolds are smaller and more compact than French marigolds. They are often larger than their height. Because their flowers are typically plain, they thrive in rainy environments better than other Tagetes types. 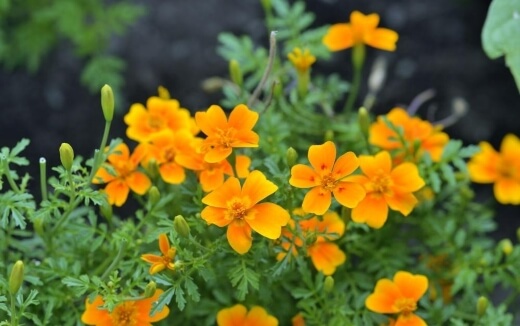 These miniature marigolds love to be in hot and dry places and are great for edging.

This product is from southern Europe. “marigold”It is not a true gold margold. It has bright, edible flowers that have a peppery, tangy flavor. 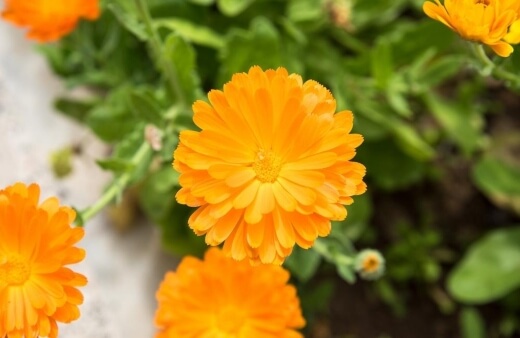 How to Grow Marigolds 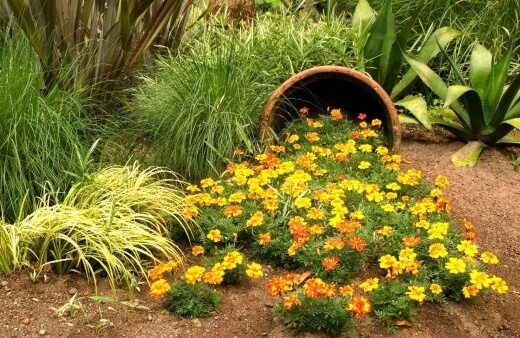 These plants can be grown in any soil, but they thrive in well-drained, fertile earth. You can dig down to 15cm to make the soil fertile.

When to Plant Tagetes

Young signets and French marigolds can be planted from spring through the middle of summer. The taller African varieties are best planted in spring as they take longer time to mature.

You can directly sow seeds in your garden Garden when the soil temperature is warm in spring. You can start seeds indoors if you prefer, but they germinate so easily outside so it doesn’t really make a difference. 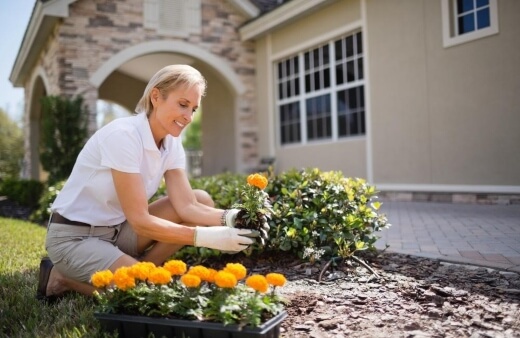 How to Plant Marigold

If your soil is lacking nutrients, you can add some slow-release fertiliser, preferably organic, into the planting hole. A 5-10-5 would be a good choice.

Wet the soil, then sow the seeds 2.5cm apart and no more than 2.5cm deep. Space French and signet types 20 to 25cm apart. The larger African marigolds should be at least 25 to 30cm apart.

If you plan to plant in containers, use a soil-based mix. We have gathered the best soil for containers here.

Mixing slow-acting fertiliser can be done during planting. Marigolds grown inside containers can become too crowded if not spaced appropriately.

This plant tend to guard your veggies from nibbling rabbits and deer, since they don’t like the scent. Marigold flowers attract ladybugs and beneficial insects such as bees. They repel unwanted visitors, such as whiteflies and tomato hornworms.

French marigolds make a great choice, as they protect your garden from harmful underground nematodes and attack the roots.

These microscopic worms are most commonly found in tomatoes, cucumbers, and snap beans. They can also attack garlic, onions and garlic.

Just something to consider, your marigolds’ water needs may be different than the vegetables they are planted with so you might need to water them separately.

How to Propagate Marigolds 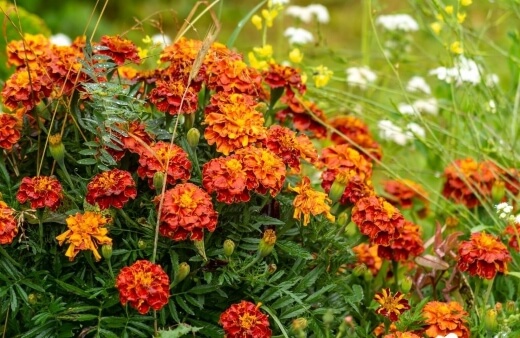 Starting from a Cutting, Propagation Marigold

It’s actually quite easy. These are the steps.

Use sharp scissors or secateurs (Find the best secateurs online.A knife is used to cut pieces about 10cm in length of green stems. The stems cannot have flowers or buds. The lower half should be emptied of all leaves.

To create a greenhouse effect, the pot can be placed inside a loosely tied plastic bag. The pot should be kept in a bright, warm area. However, it should not be exposed to direct sunlight. The potting mixture should be lightly watered every four to five day.

After the cuttings have rooted you can transfer them into larger pots with regular potting soil. Before you plant them in your garden, they should be established.

Marigolds can also grown from seeds. The seeds are large and easy to manage. Marigolds can be grown indoors but will germinate quickly outdoors if they are sown directly in garden soil.

Many marigolds from last season self-seed so fast that you may not have to plant them again once they are in flower.

If you are going to start marigold seeds indoors, sow them on the surface of a tray or small pot filled with ordinary commercial potting soil that’s slightly damp.

The seeds should be covered with vermiculite. Finally, cover the tray/pot with plastic. It should be stored in a warm location. The seeds should not be allowed to germinate or sprout before they are fully grown.

Once the seeds have sprouted, remove the plastic from the container and place it in a sunny location. An area that receives four to six hours of sunlightEach day, there is plenty of light. Even artificial lighting is acceptable.

Water from below is a good way to keep the potting mixture moist. This will allow the pot absorb water from a tray. After the seedlings have developed a lot of new foliage, they can be transplanted outdoors.

Marigolds are plagued by pests, diseases, and fungi 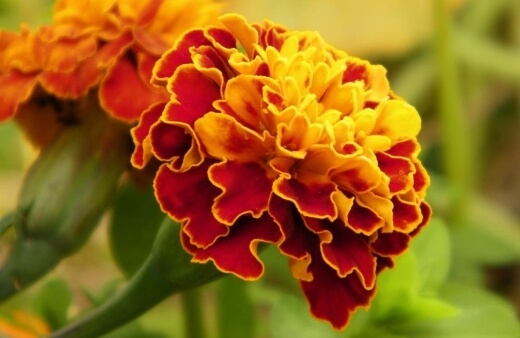 Marigolds are extremely resistant to pests. They can be infested by spider mites. These pests can either be controlled by spraying water or using an insecticide soap for just a few days.

If you need to bring in the professionals, have a look at our garden pest control guide to help you decide which one is best for your garden.

Sometimes marigolds are affected by fungal diseases such as powdery mildew if conditions are too wet. A good way to prevent this is to avoid getting water on the marigolds’ leaves and plant in well-drained soil. You should also do your best to manage weeds.

Marigolds can easily be grown from seeds. When the seedlings are just beginning to grow, they can quickly die. The stems become weak and eventually turn to black. This is called damping off disease. This fungal disease can be caused by many species of fungi.

It is impossible for you to stop it. However, you can ensure that your pots have air circulation and are clean. Keep your seedling trays warm.

Marigolds with taller stems can become heavy and top-heavy and can fall over if they are under strong winds or heavy rains. You can make the plants deeper and take out the lower leaves to prevent this.

This creates large root systems that help to hold the plant upright. You can also remove withered blooms right after they have bluffed.

Marigolds can sometimes slow down during the hottest summer months. These heat waves are a good opportunity to prune the plants.

The When the temperature starts to drop, plants will flower and grow quickly.In the late summer and early autumn. 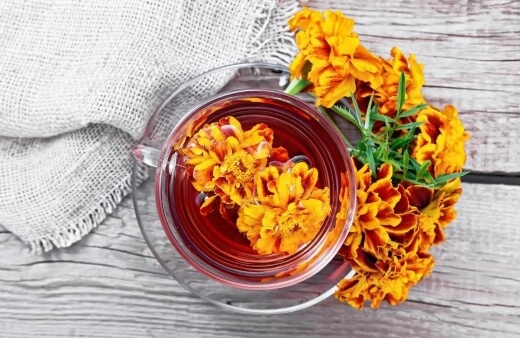 Is the flower marigold good skin-care?

Marigold can be used medicinally are used for contusions, bruises and varicose veins. Marigold ointment promotes the healing of sunburns.

Is there a margold tea?

Marigold tea has many uses. You can drink it three times a day to ease cramps, aid in digestion, and reduce nausea. It can relieve nausea, stomach ulcers and menstrual discomfort. A marigold-tint may be used to ease headaches and promote sleep.

What can you do about dried marigolds

Dried petals can be added to breads, casseroles, and even omelettes to add a subtle, unique flavour. You can stir-fry them with vegetables or alone. They’re also great in soups and stews.

How can marigolds be used to your hair?

Make a tea by adding three cups of hot water to a mixture of fresh or dried marigold flowers. Let it sit for at most an hour. The water can be strained and allowed to cool before you use it to rinse your hair. It will improve shine and oily hair.

Marigolds are easy plants to grow in your garden

Marigolds are a sturdy flower. They make a great companion for the garden, protecting it against hungry insects and microscopic bugs. They are happy and come with many varieties.

You can make marigold hair rinses or marigold tea. You can also use them as brightening accents to your home. We think marigold flowers are just lovely and we’re giving them our Green thumbs up.

Do You Need Large Pinwheels for Your Yard? We review the Top 4 Most Popular Pinwheels
ORGANIC FARMING DISADVANTAGES AND ADVANTAGES-HOW DO I START?
Is it a waste of time?| Is Waste of Time?